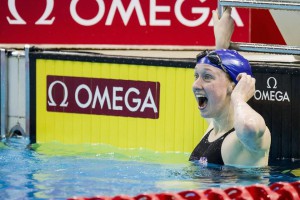 The time for Rudin also breaks the official junior world record recognized by FINA which also stands at 4:40.02 from Eastin’s 2013 swim.

After the butterfly leg Rudin was in last, however she picked things up and moved right into first after the first 50-meters of backstroke. She stayed in first for the remainder of the race, holding off her teammate Georgia Coates.

Coates managed to touch in for the silver medal with a 4:39.94. She had Africa Zamorano of Spain right on her tail who rounded out the top three with a 4:40.15 performance.

With only two finals completed thus far in the competition, the 1-2 finish puts Great Britain at the top of the medal standings in swimming.

From everyone at NOVA, Nathan and the Notts ASA Board and Swimming Committee, Congratulations Rosie!!! We are all very proud of you.