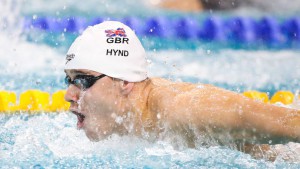 The 20-year old successfully defended his SM8 200m Individual Medley title while there were also medals for Andrew Mullen, Hannah Russell, Thomas Hamer, Jessica-Jane Applegate and Sascha Kindred as all six British finalists reached the podium on the night.

Hynd has been untouchable in the SM8 200m Individual Medley since winning gold at the European Championships in 2011, claiming the Paralympic title at London 2012, the World Championship title in 2013 and winning both European and Commonwealth golds last season.

The Nova Centurion swimmer ensured it was a successful return to the site of his Commonwealth victory as he dominated the final in Glasgow, lowering his own European marker with a 2:22.40 effort to finish more than four seconds clear of the field.

And Hynd admitted he has his sights firmly set on breaking the world record of 2:20.92 as he aims to defend his Paralympic crown in 12 months time.

“I’m really happy with the medal but I’m actually a little disappointed with the time – I thought I had a bit more in me,” said Hynd. “But it’s a PB and going into Rio I’ve still got the world record to shoot for.

“Obviously I need to keep working on that but I think it’s going to give me that extra little push I need for next year.”