Nova Centurion swimmer Rudin – who had already won bronze over 200m Backstroke and 200m Individual Medley in Brazil – finished her meet with gold over 400m IM. 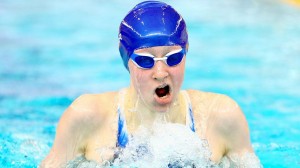 The 15-year old clocked 4:53.76 for victory with teammate Olivia Willis narrowly missing the podium in fourth on 5:03.51.

Meilutyte added to her 50m Breaststroke and 50m Freestyle wins with a third gold over 100m Freestyle.

The Plymouth Leander swimmer set a Championship record 55.22 to take victory in the final ahead of training partner Grace Vertigans in 55.93.

Vertigans returned to the podium later in the session as she tied for 50m Backstroke silver with ESSA teammate Brittany Horton (City of Birmingham) on 30.09.