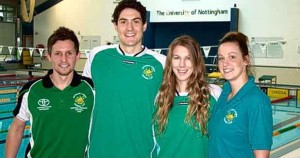 A quartet of masters swimmers from Nottingham Leander Club are celebrating after being confirmed as world record holders at the second attempt, after technical issues prevented them from getting it at the first try.

The group had originally broke the record at the ASA National Masters Championships in Sheffield last October but, during the race, the electronic timing system malfunctioned.

For the record to stand, the group needed to submit their 50-metre split times to FINA – the world governing body – however the results only showed the total time which meant the world record could not be ratified.

This article was posted in Masters, News, Swimming. Bookmark this Article.