Ollie gets a full set

After the success earlier this week with the two Hynd brothers, Sam and Oliver, Ollie claimed a Silver Medal beating his older brother, Sam, who took the Bronze in the Mens 400m S8 Freestyle event. Last night Ollie went and claimed the Bronze medal in the Mens 100m S8 Backstroke. 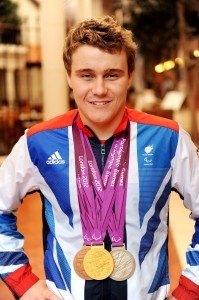 Ollie has again been in the pool today and managed to beat his rivals in the 200m S8 IM by almost 2 seconds claiming gold and completing his set of Paralympic medals. Ollie also broke the European record in this 200m S8 IM.