Going into the National Youth Medley Relay heats on the 21st of July the the girls had qualified as the third fastest team from the regional championships, but were quickest after the heats finishing in a time of 4.17.47 just ahead of strong teams from the City of Manchester Aquatics and Plymouth Leander both on 4.18.
In the finals, later the same day Georgia Hohmann doing the backstroke, Rebecca Barsby doing the breast stroke, Fiona Donnelly doing the butterfly and Natasha Hofton improved on their time, finishing in 4.13.46 to take the well earned gold medals, with the City of Manchester taking silver in 4.15.94 and Plymouth Leander bronze in 4.18.09.
Splits – 1.03.45 backstroke, 1.12.60 breast stroke, 1.00.86 butterfly and 56.55 freestyle. 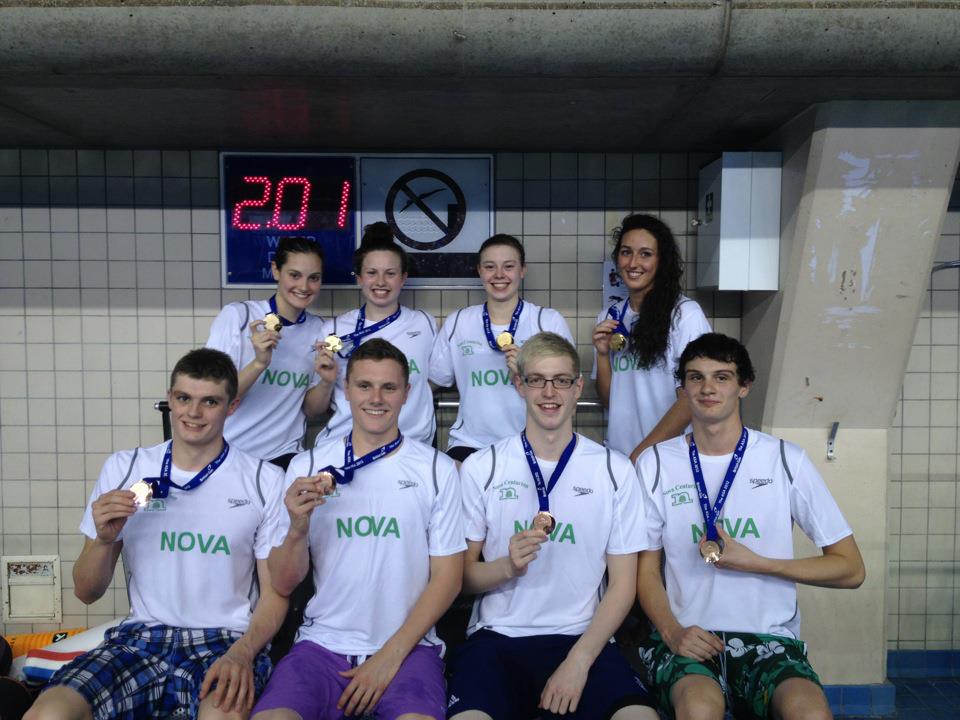 Following straight after the girls thrilling final event came the final of boys Medley relay. The Nova boys had qualified to the Nationals as the tenth fastest team from the regional heats and were fifth fastest following the morning heats finishing in a time of 3.58.96, behind teams from Plymouth Leander, Manchester, Warrender and Gloucester City.

In the finals Mathew Watkinson doing the backstroke, Daniel Timms doing the breast stroke, Luke Howdle doing the butterfly and Karl Morgan doing the freestyle improved on their time after an exciting end to the Championships to get bronze medals after finishing in a time of 3.54.87, behind the gold medal winners Plymouth Leander and silver medal winners City of Manchester Aquatics.
Splits – 1.00.03 backstroke, 1.08.08 breast stroke, 55.03 butterfly and 51.73 freestyle.