Charlotte Henshaw smashed her own European record to clinch SB6 100m Breaststroke silver on the second day of the Glasgow 2015 IPC Swimming World Championships at Tollcross.

Having initially lowered her marker to 1:37.45 to qualify second fastest from the heats, the Paralympic silver medallist sliced another 0.5 seconds off that time as she clocked 1:36.94 in the final. 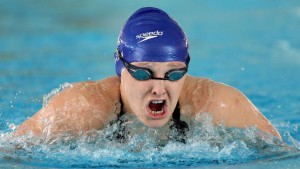 It took a world record from 13-year old Tiffany Thomas Kane to stop Henshaw bagging gold in Glasgow as the Australian teenager came home in 1:34.95 while Henshaw’s GB teammate Ellie Simmonds collected her second medal in two days with bronze in 1:39.99.

“I knew I was going to have a tough race after this morning,” said Henshaw. “I swam a PB this morning and my real aim was to be relaxed for the final and try and go another best time.

“That was my aim coming into the meet and I’m so happy to have been able to do it twice.

“It’s great to win a medal at home in front of friends and family. It’s a little reminiscent of London and that was a silver medal there so I’m getting a little collection of them now.

“This year has been a massive learning curve for me and I’ve changed a lot of stuff so I’m really excited to put those changes I’ve made into a full year of training ahead of Rio.

“I’ve seen the benefits of those changes so with a full year, who knows what might happen?”